A few months ago I sat with Raymundo Muniz, the energetic events director at the Hotel Cacao in Playa del Carmen on Mexico’s Carribbean Coast. As a waiter set down a plate of freshly prepared ceviche topped with minced walnuts and small slices of green apple, Muniz looked out past the well dressed guests dining at nearby tables and the shimmering surface of the pool towards the buildings in the blocks that separate the hotel from the beach. “In the last six years, Playa del Carmen has grown more than even Cancun. Development is moving up the Riviera Maya. This hotel wasn’t here, the Hyatt wasn’t here. There’s been a ton of growth,” he told me. Over the past few years the Riviera Maya, which stretches from just south of Cancun past the secluded resort town Tulum, has emerged as Mexico’s premier tourist destination.

In a recent article I explained:

The Riviera Maya continues to be seen as an oasis from violent crime, [whereas] the area of Baja California near the beach city Los Cabos has been hurt by a recent uptick in organized crime-related violence. The coastal city of Mazatlan in Sinaloa made the news in 2014 as the site of the capture of crime boss Joaquin ‘El Chapo’ Guzman. The tourist town of Puerto Vallarta sits on the coast of the state of Jalisco, an area affected by the emergence of a new military-style drug cartel. No Pacific Coast city, however, has fared worse than Acapulco, a once-great beach town that has suffered through a terrifying period of cartel warfare and still convulses with daily reports of local gangs murdering, extorting, and robbing residents. The Riviera Maya, on the other hand, is in the midst of a boom. The number of travelers arriving at the airport in Cancun increased from 15.9 million in 2013 to more than 17 million in 2014. During the same period the island of Cozumel which sits just off the coast from Playa del Carmen, experienced a 24% increase in cruise ship arrivals. Overall, Mexico remains the most popular foreign destination for U.S. tourists. After a decade in the doldrums, the number of tourist arrivals from the U.S. to Mexico reached a record breaking 25.9 million in 2014, an increase of 24%. More U.S. citizens are visiting Mexico than ever before, but the trend appears to be a shift away from Acapulco in favor of the Riviera Maya.

Additional Reading: Can Acapulco Bounce Back?

Over the last 15 years more than 100 new hotels have been built in the Riviera Maya as companies such as Starwood Hotels, Global Hyatt, and FRHI Hotels have invested in properties. The number of hotel rooms in the area has increased from just under 15,000 in 2000 to over 42,000 in 2014. The number of people visiting Mexico’s Riviera Maya topped 4.4 million in 2014 up from 2.2 million in 2005. The number of visitors in 2015 is expected to top 4.5 million. Airline companies Volaris and Interjet run multiple flights a day connecting Cancun to Mexico City. Delta offers direct flights to Cancun from New York and British Airways ferries tourists directly from London. Seeking refuge from the late-morning sun at an indoor table at her restaurant, Jennifer Smith, the owner of the Turtle Bay Café in Akumal, told me, “We’re so far away from other parts of Mexico that have had problems with drug cartels. It’s very safe here.” Smith, who has lived in the area for almost two decades told me, “There’s been a huge change. Ciudad del Carmen was just a tiny town when I got here. Tulum was just a hippie refuge that started to change 10 years ago.”

Susan Bohlken, a San Francisco transplant, has seen the area around Zamas, the hotel she owns and manages in Tulum expand over the last twenty years. “Tulum has really transformed. This entire coast has been developed since we first came to the area. There were about four or five small hotels in Tulum and not more than 30 in Playa del Carmen,” she told me.

The evolution of Tulum is hard to miss. Joel Samuel, a skinny college-age taco chef who mainly speaks Mayan, the local indigenous language, said he has seen a big increase in the number of tourists stopping by Tacqueria Don Beto the small cochinito pibil pork stand where he works. As he scraped chunks of unctuous, succulent whole, slow-roasted pig onto a plate, he told me “10 years ago, there was nothing. Now, there are so many people.”

Additional Reading: Can Acapulco Bounce Back? 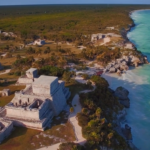 Tulum! When The Jungle Meets The Ocean!